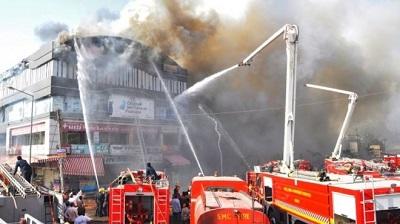 At least 17 students have died as a fire ripped through their classrooms in India, officials said.

Students were seen jumping and falling from the building in the western city of Surat as black smoke billowed from windows.

Most of the victims were teenagers who had been studying at a tuition centre.

The cause of the fire is not yet clear, but officials said the blaze spread through packed classrooms because of the material used in the roof.

At least 20 others sustained serious injuries and are being treated in hospital in Gujarat.

"The students lost their life both because of the fire and jumping out of the building," Deepak Sapthaley, a local fire official, told AFP.

All of the dead were aged below 20 years and many were trapped because the fire had emanated from near the staircase, Reuters reported.

An inquiry into the incident has been ordered and a report is expected within three days, said the spokesman for the office of Gujarat Chief Minister Vijay Rupani.

The fire is the latest in a long line of deadly blazes in India. In February at least 17 people died in a Delhi hotel fire.