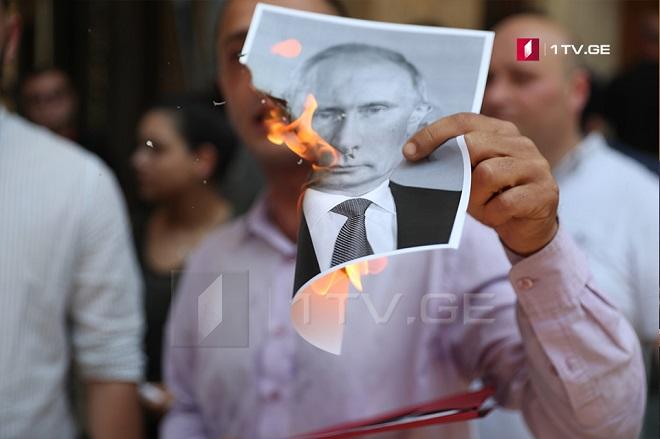 The arrival of a Russian delegation headed by MP Sergey Gavrilov, the President of the General Assembly of the Interparliamentary Assembly on Orthodoxy, which is being held in Tbilisi June 19-23, was met with protests at the Palace of State Ceremonies in Avlabari.

The demonstrators held posters and banners saying “Gavrilov is KGB,” and “Abkhazia is Georgia,” Putin Khuylo” and others. They accused Gavrilov for fighting against Georgia during the war in the 1990s in occupied Abkhazia.

The protesters highlighted that Gavrilov initiated a draft law in 2011 providing assistance to de-facto authorities of Georgia’s two Russian occupied regions of Abkhazia and South Ossetia.

The demonstrators stressed that MP Gavrilov is Putin’s “ideological ally” and he should not have been allowed in Georgia. The organizer of the rally was the civil movement “Russia Is Occupant.”

Gavrilov, who is also the Chairman of the Committee on Issues of Public Associations and Religious Organizations of the Federal Assembly of the Russian Federation, the State Duma, stated he never participated in any hostilities in Abkhazia.

He believes that Russia and Georgia should resume relations in many directions.

"I think we should contribute not only to tourism and business but also to culture, and I want to answer to the fake news released by the Georgian media. I have never participated in any hostilities on the territory of Abkhazia. It’s a lie,” he said.

The Russian MP also responded to the question as to whether he feels uncomfortable while in the country, 20% of which is occupied by Russia.

“I have no discomfort at all. I am very happy. Georgia is my homeland,” he responded.