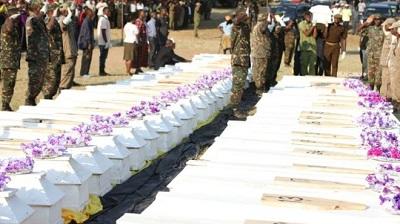 Tanzania has held a mass funeral for people who died when an overturned fuel tanker exploded on Saturday.

Officials have said people were trying to siphon fuel from the vehicle on a main road in the Morogoro region when it exploded, killing 71.

Ahead of the funeral, hundreds of relatives visited the hospital to try to identify their dead family members, but many were burnt beyond recognition.

As a result, officials have promised to do DNA tests.

This is the latest in a series of similar disasters across Africa, and Tanzania's President John Magufuli has pleaded people to stop risking their lives by siphoning fuel from broken-down tankers.

"There are vehicles that carry dangerous fuel oil, as in this case in Morogoro, there are others that carry toxic chemicals or explosives, let's stop this practice, please," AFP news agency quotes him as saying on Saturday.