Satellite show Iran oil tanker sought by the US 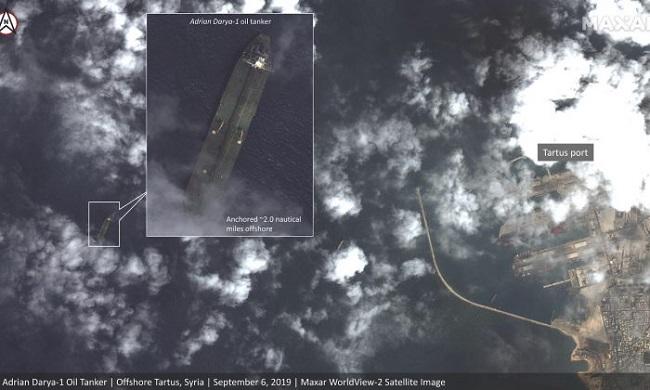 A once-detained Iranian oil tanker pursued by the U.S. appears to be off the coast of Syria, where Tehran reportedly promised the vessel would not go when authorities in Gibraltar agreed to release it several weeks ago.

The appearance of the Adrian Darya-1 in waters near Tartus comes as Iran was prepared to Saturday to announce what further steps it had taken to move away from its 2015 nuclear deal with world powers, more than a year after President Donald Trump withdrew the U.S. from the accord.

Both events have raised tensions between Iran and the U.S. over recent months that have seen mysterious attacks on oil tankers near the Strait of Hormuz, Iran shooting down a U.S. military surveillance drone and other incidents across the wider Middle East. The U.S. issued a new warning of a potential threat to shipping off of Yemen early Saturday.

The tanker Adrian Darya-1, formerly known as the Grace-1, turned off its Automatic Identification System late Monday, leading to speculation it would be heading to Syria. Other Iranian oil tankers have similarly turned off their tracking beacons in the area, with analysts saying they believe crude oil ends up in Syria in support of embattled President Bashar Assad’s government.

Cmdr. Joshua Frey, a spokesman for the U.S. Navy’s Bahrain-based 5th Fleet, said the Navy remained ready to maintain the safety of shippers in the region. He declined to specifically discuss the warning. The U.S. military’s Central Command did not respond to a request for comment.