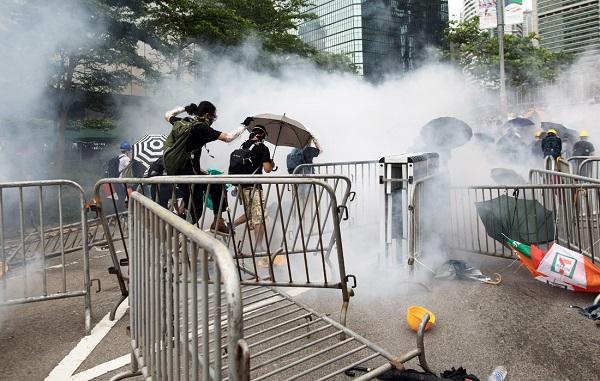 A group of hardcore protesters threw petrol bombs at a police station as violence flared in Hong Kong during a banned march that drew tens of thousands.

But large numbers defied authorities, with a small group of black-clad protesters attacking a police station.

Hong Kong has been convulsed by pro-democracy protests for four months.

The unrest in the territory, which is part of China but enjoys unique freedoms, has been the worst crisis since the British handover in 1997.

At the Tsim Sha Tsui police station, officers fired tear gas as the building's gate was set on fire. A water cannon was then deployed to clear the area, which would normally be thronged with Sunday shoppers.

In one controversial incident, a water cannon truck fired powerful jets of blue liquid at protesters outside a mosque.

Police said the water cannon had "accidentally affected the entrance and front gate" of the mosque.

The Muslim Council of Hong Kong said the mosque was not targeted by police, whose officers later apologised and helped with the clean-up effort.