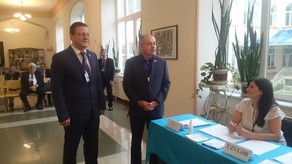 Today, the Mission of International Observers from the Parliamentary Assembly of the Commonwealth of Independent States (IPA CIS) conducts monitoring of the popular vote (referendum) on amendments to the Azerbaijani Constitution.

The head of the mission, Deputy chairman of the Russian Federal Assembly Federation Council Ilyas Umakhanov began monitoring visits to the 2nd polling station of the 29th Sabail constituency, where he familiarized with course of the voting.

Today, international observers from the CIS Inter-parliamentary Assembly will carry out monitoring of the referendum polling stations in Baku and Sumgayit, as well as settlements of Absheron district.