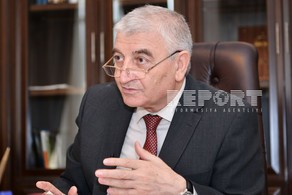 Azerbaijan`s Central Election Commission has announced initial results of a referendum on amendments to the country`s Constitution.

Speaking at a press conference, Chairman of the Central Election Commission Mazahir Panahov said voter turnout was high in the referendum.

He said polling stations opened at 8:00 and closed at 19:00 local time across Azerbaijan.

Panahov said that according to initial results, 3,671,707 people voted in the referendum, with reports from 70.2% of the polling stations (3950 polling stations) processed. Overall voter turnout was 69.7%, he said.

“Azerbaijani voters approved of all 29 issues put to referendum, so all these amendments can already been regarded as legitimate,” Panahov said.

He said the voting took place in a democratic and transparent manner.

Panahov added that the Central Election Commission ensured the conduct of the voting in accordance with law.

The Central Election Commission (CEC) issued a total of 5,280,924 ballot papers for the referendum. All constituencies were supplied with computers and other necessary equipment. All polling stations were provided with indelible ink and special devises for reading it.

Throughout the day, the Central Election Commission issued five reports on the voter turnout (10.00, 12.00, 15.00, 17.00, and 19.00) through the State Automated Information System, which was available at the commission’s official website.

1000 polling stations in 119 constituencies were equipped with web cams to provide internet users with an opportunity to watch the voting process on-line.