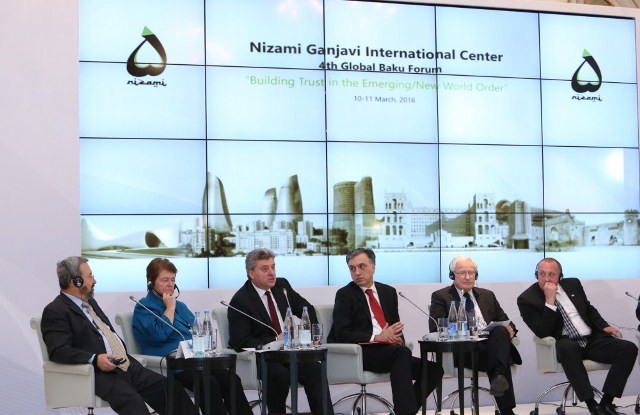 A final panel titled “How to avoid conflicts in the emerging multi-polar world of the 21st Century?” as part of the 4th Global Baku Forum took place.


ISESCO Secretary-General Abdulaziz al-Tuveyjri commented on topics, especially Syrian crisis discussed at the forum. According to him, the instigators of the problem are Russia and Iran: “Who empowered Russia and Iran to support dictator’s regime in Syria with their militants? In fact a dictatorship predominates in Syria and the people left the country due to the fact that they don’t love that regime. We must answer Iran and Russia this. Iran wants to get advantage in the Middle East and Russia is supporting it. Russia supports not revolutionists, but those are against the revolution. What is the Islamic State that impossible to be destroyed? It’s is supported. The instigators of these problems are Russia and Iran”.


In his turn, the former Bulgarian President Petar Stoyanov thanked the President of Azerbaijan and the State Committee on Work with Diaspora for organizing the forum at a high level.


Member of the Presidency of Bosnia and Herzegovina Mladen Ivanic drew attention to the dialogue held at the forum in connection with the issue of migrants. He pointed out that there was a fear against migrants in Europe and therefore the states closed its borders.


The former president of Latvia, co-chair of the International Center of Nizami Ganjavi, Vaira Vike-Freiberga highly appreciated the forum and noted that next year is expected to hold such a forum.


IV Global Forum in Baku has finished its work.