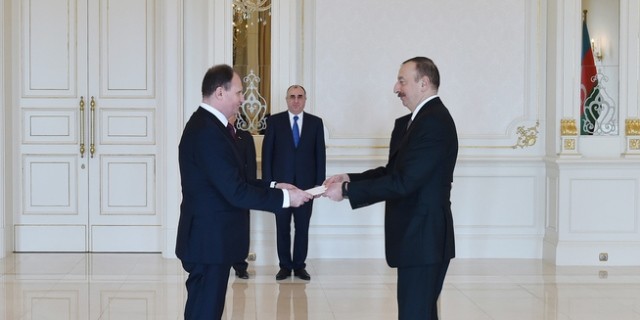 Ambassador George Leuke reviewed the guard of honor. George Leuke handed his credentials to the head of state.

The head of state noted that the bilateral relations between Azerbaijan and Moldova have been developing successfully for many years on various fronts, including politics, as well as within international organizations. The President expressed hope that the Ambassador would actively work to strengthen these ties. Stressing the importance of defining new areas of Azerbaijan-Moldova cooperation, especially in the economic sphere, President Ilham Aliyev said the two countries have not enough used their bilateral trade and investment potential. The head of state noted the significance of high-level reciprocal visits in terms of developing the bilateral relations. Underling that the two countries participate in the European Union`s programs, President Ilham Aliyev noted that the cooperation on this front was satisfactory. The head of state expressed confidence that the Ambassador would contribute to the development of the bilateral ties, including cooperation in the economic area, and wished George Leuke success in his activities.

Newly-appointed Ambassador Extraordinary and Plenipotentiary of Moldova George Leuke noted that there were big opportunities for developing the economic relations between the two countries. George Leuke said he would spare no efforts to contribute to the development of Moldova-Azerbaijan bilateral ties and the strengthening of cooperation and friendly relations.