Made in Azerbaijan’ brand already spread to world 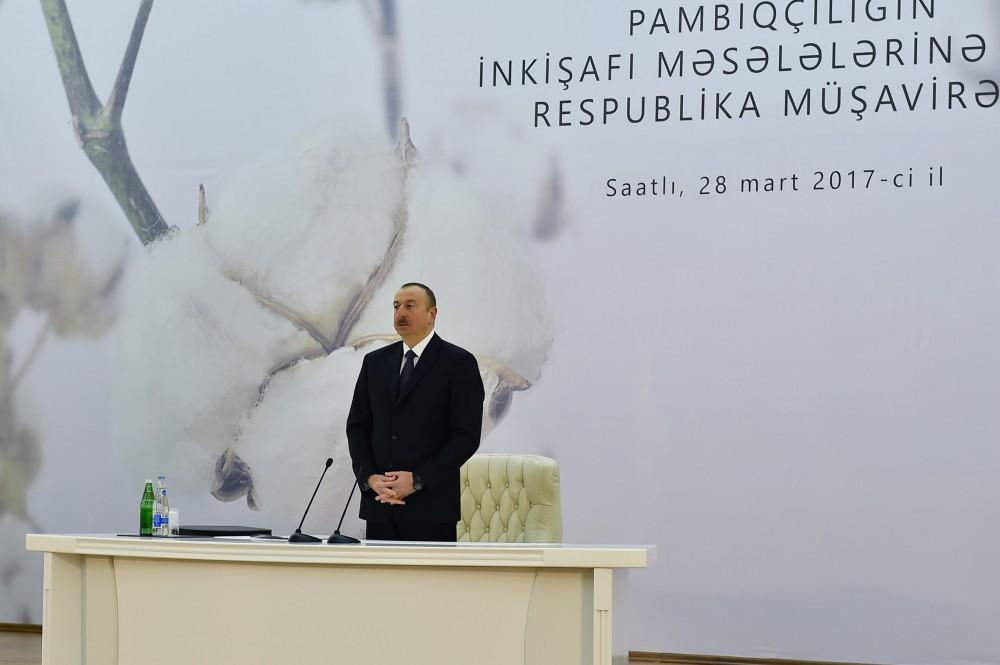 Increasing the non-oil exports is one of the key tasks of the coming years, because everything is going in a positive direction in the oil and gas sector, said Azerbaijan’s President Ilham Aliyev as he addressed a conference on the development of the cotton-growing industry, held in Saatli District.

“Our great Southern Gas Corridor project is being successfully implemented,” he said. “And this is a historic project. But our main goal is to increase our non-oil exports.”

The head of state noted that traditional industries of agriculture must be developed.

“We are talking not only about the cotton-growing industry,” he said. “We as well made a significant turning point both in tobacco-growing and sericulture last year.”

“Tobacco production is increasing,” Ilham Aliyev said. “Now we are seriously engaged in the export of dry tobacco, contracts have been signed. The development of viticulture is rapidly growing. Wine products export must also be boosted and is already growing. Sericulture is developing rapidly. The export of non-oil products, particularly the agricultural products is the main task for us at the current stage of our country’s development.”

“We are already creating trading houses in a number of countries. The ‘Made in Azerbaijan’ brand has already spread to the world,” he said. “Now the export of Azerbaijani goods is the most important issue for me in all political contacts and during the meetings with my counterparts.”

“I raise this issue and where there is political support, of course, there are new opportunities for our entrepreneurs,” President Aliyev added. “Entrepreneurs should be active too, and enter new markets themselves. The Azerbaijani government is helping them.”