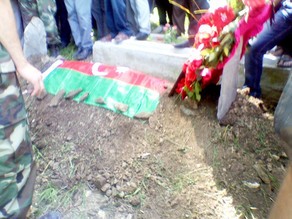 Serviceman of Azerbaijani Armed Forces has been buried.

Notably, on March 27, units of Armenian armed forces violated the state border in the territory of Gazakh region and attempted to enter the territory of Azerbaijan. As a result of vigilance of the units of the Azerbaijani Armed Forces located in this direction, action of the enemy revealed in advance and relevant measures carried out to prevent the attempt. Occupiers, suffering losses forced to retreat.