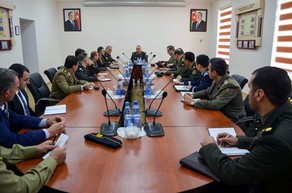 Today, at the International Military Cooperation Department, in accordance with the instruction of Azerbaijani Defense Minister, Colonel-General Zakir Hasanov, was held a meeting with participation of the military attaches of foreign countries accredited in Azerbaijan.

The meeting was also attended by the head of International Military Cooperation Department of the Defense Ministry, Major-General Huseyn Mahmudov.

The military attaches were briefed on the objective information on shooting Azerbaijani villages by the Armenian units on the frontline, the results of violation of the ceasefire by the enemy, attacks of the Armenians to the contact line of the troops, the escalation of the conflict, on the prevention of the enemy's sabotage at the occupied territories of Azerbaijan.

Finally, the speakers answered the questions of the participants.