"Our soldiers demonstrated a great bravery" 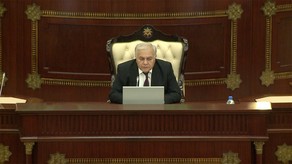 'Each time when Azerbaijan gains a great achievement, we face with Armenian provocations. The ceasefire has always been violated by Armenian army and our army silenced them with return fire'.

'Recently Armenians began shelling. Azerbaijan also did not have patience anymore. You know, on the night of April 2, Azerbaijan responded to Armenians provocation and conducted strong action and clipped Armenian wings. Azerbaijani army showed its power again. We liberated the heights, from where Armenian army observed our army. Tension is still going on today. After Azerbaijan's liberation the heights, however, it has temporarily declared ceasefire regime and wanted to resolve the issue, Armenian side did not agree. It has continued attacks. Therefore, the Azerbaijani Foreign Ministry made a statement that can go to any negotiations after withdrawal of Armenian troops from Nagorno-Karabakh. Azerbaijan is fighting in its own lands', O.Asadov said.

He added Azerbaijan does not agree to keep the status quo: 'Azerbaijan will do its best to launch action for liberation of Nagorno-Karabakh. There is no belief in international organizations. Perhaps conditions laid down by Azerbaijan will be fulfilled, otherwise the result will be obvious in the future. I would like to congratulate Azerbaijani army for exact operation. Our soldiers shown great bravery. Of course, several servicemen killed during tense battles'.