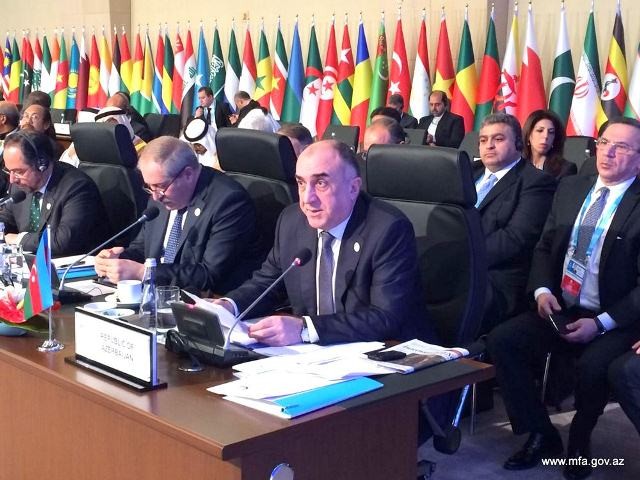 Azerbaijani Foreign Minister Elmar Mammadyarov has addressed in the preliminary meeting of the OIC 13th Summit of the Organization of Islamic Cooperation (OIC) Council of Foreign Ministers.

The press service of Azerbaijani FM informs that E.Mammadyarov said that unfortunately we cannot state that the overall situation in the Islamic world has done significant progress since our last meeting, instead the scope of challenges faced by our Ummah has extended: "Azerbaijan expresses deep concern over the consequences of wars and armed conflicts erupted in a number of countries which include not only devastated cities and killings of civilians but long-term humanitarian and refugee crisis."

"Azerbaijan commends the dedicated work carried out by OIC Secretary General on the Palestinian cause and reiterates its full support to the brotherly people of Palestine in their struggle for achieving peace, stability and establishment of their independent state with Al-Quds its capital."

Mamadyarov said that on April 2, 2016 Armenia once again confirmed its strong commitment to destructive policy in the negotiation process of Armenia-Azerbaijan Nagorno-Karabakh conflict by flagrantly violating ceasefire and shelling at the positions of Azerbaijani army and densely populated residential areas along the contact line. This provocative act received an adequate response from the Azerbaijani army which launched counter-attacks and repulsed Armenian forces. Today Armenia continues violating ceasefire regime and diverting attention from the substantive issues needed for peace process by the demonstrating to the world its main intentions. Azerbaijan calls the international community to demand from Armenia to cease the illegal occupation of Azerbaijan’s territories, to withdraw its troops from all seized lands and to engage constructively in the conflict settlement process in accordance with the requirements of relevant resolutions of the UNSC and the norms and principles of international law.