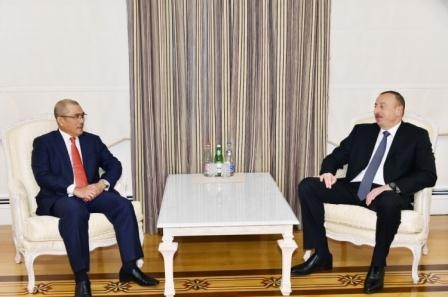 President of the Republic of Azerbaijan Ilham Aliyev has received Deputy Speaker of the House of Representatives of the Malaysian Parliament Seri Ronald Kiandee.

Seri Ronald Kiandee said that it was their first visit to Baku. He highlighted the activity of the Malaysia-Azerbaijan friendship group at the Parliament of Malaysia, saying it consists of eight members. He hailed the friendship group’s role in developing relations between the legislative bodies of the two countries. The Deputy Speaker stressed the importance of reciprocal visits. Describing Azerbaijan as an important partner of Malaysia, Seri Ronald Kiandee hailed the Malaysian Petronas company's activities in the country as a good example of bilateral relations.

Saying the bilateral relations between Azerbaijan and Malaysia are of pivotal importance for both countries, the head of state noted that these ties had developed in various fields, including political, economic and other ones.


President Ilham Aliyev noted that there were ample opportunities for developing cooperation between the two countries in investment making, high technology, tourism and other fields.

Underlining Malaysian Petronas company's successful operation in Azerbaijan, the head of state said that the company had a large stake in one of the important projects in the country.

Describing Azerbaijan and Malaysia as friendly countries, President Ilham Aliyev emphasized that the two countries have always supported each other within international organizations.