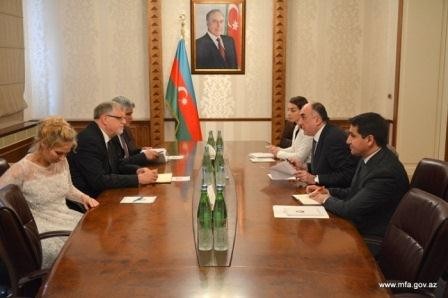 At the meeting Minister Elmar Mammadyarov briefed Mr. Salber on the recent provocations of Armenia, as well as targeting the positions of the Army of Azerbaijan along the line of contact and the civilians densely residing in the territories adjacent to the frontline area by using heavy weapons since April 2. He stated that Armenia aims to obstruct the conflict settlement process perpetrating such provocations and escalating the situation.

Minister mentioned that the tension started since April 2 by the provocation of Armenia once again proved that the status-quo is unsustainable and unacceptable. He emphasized that in order to ease the tension and achieve progress in the conflict settlement, Armenian forces must be withdrawn from all occupied territories of Azerbaijan and the fact of military occupation must be ceased.

Herbert Salber expressed his concern over the recent tension and noted that he and Federica Mogherini, High Representative of the European Union for Foreign Affairs and Security Policy talked on the phone with the Foreign Ministers of Armenia and Azerbaijan. He also mentioned that the current status-quo is unacceptable and unsustainable and highlighted the importance of negotiations over the conflict settlement.

At the meeting the sides exchanged views on the issues of mutual concern.