Armenians shocked intermediaries by this action 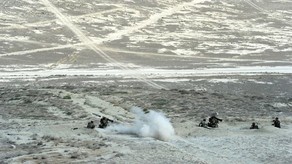 “Armenians refuse to recover the dead bodies of their servicemen”.

The Defense Ministry has commented on Armenia’s refusal to hand over the dead body of an Azerbaijani serviceman, failing to reckon with the initiative of the international mediators.

The Defense Ministry told local media that Armenians, as always, violate the reached agreements, do not reckon with the initiative of the international mediators and being aware of their impunity, demonstrate their actions towards increasing the tension.

Despite the agreement reached earlier to hand over the dead body of an Azerbaijani serviceman, Armenia's subsequent refusal in this issue shocked the mediators from both sides of the frontline, according to the Ministry.


Another matter of regret is that the mediators do not make haste to take tough measures against Armenia and to evaluate their actions, said the ministry, adding that this negatively affects the image of such international organizations as the International Committee of the Red Cross and the OSCE.

Armenia also ignores the repeated warnings from the mediators about prohibition of taking photos and videos while recovering the dead bodies of the servicemen from both sides, according to Azerbaijan's Defense Ministry.

“Armenians do it covertly and then share those materials in social networks. Those materials were deleted only after Azerbaijan expressed protest to the international mediators”, said the ministry.

The Defense Ministry said Azerbaijan has created perfect conditions for Armenians for recovering the dead bodies of their servicemen.

Possibly, those dead bodies left by Armenians in the battlefield are the bodies of the terrorists conscripted as "volunteers", according to Azerbaijan's Defense Ministry.

Dealing with the settlement of the Nagorno-Karabakh conflict is the OSCE">OSCEMinsk Group, which was created after the meeting of the OSCE">OSCE Ministerial Council in Helsinki on 24 March 1992. The Group’s members include Azerbaijan, Armenia, Russia, the United States, France, Poland, Germany, Turkey, Belarus, Finland and Sweden.

Besides, the OSCE">OSCE Minsk Group has a co-chairmanship institution, comprised of Russian, US and French co-chairs, which began operating in 1996.

Resolutions 822, 853, 874 and 884 of the UN Security Council, which were passed in short intervals in 1993, and other resolutions passed by the UN General Assembly, PACE">PACE, OSCE">OSCE, OIC, and other organizations require Armenia to unconditionally withdraw its troops from Nagorno-Karabakh.