"The conflict must be resolved within international principles" 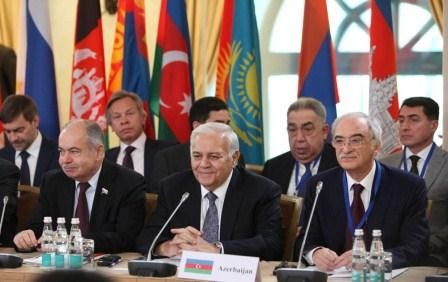 Inter-parliamentary cooperation to assist for finding the ways of solution of conflicts in Eurasian region said Parliament Speaker Ogtay Asadov in the first meeting of speakers of parliaments of the Eurasian countries in Moscow, Russia.

The speaker said the world faced with the challenges as the financial crisis, terrorism, climate changes, food and energy security and the cooperation among the states plays crucial role in settlement of these problems.

Mr. Asadov highlighted the importance of the inter-parliamentary diplomacy. He also said as the result of the Armenia-Azerbaijan, Nagorno-Karabakh conflict 20 percent of the Azerbaijani territories were occupied by Armenia. “Azerbaijan faced with the ethnic cleansing policy; more than one million Azerbaijanis became IDPs and refugees. The international organizations, including the UN Security Council, the UN General Assembly adopted the documents demanding unconditional, immediate withdrawal of Armenian Armed Forces from the Azerbaijan`s occupied lands. The OSCE Minsk Group Co-chair countries reaffirmed that status-quo is unacceptable. The conflict must be resolved soon,” the speaker added.

Mr. Asadov also said Armenia refused to honour the international efforts that directed to solving the conflict. “Maintaining the conflict in this situation is the main obstacle to peace and stability in the world, especially in the Southern Caucasus region. The recent developments in the line of contacts of Armenian and Azerbaijani troops are evidence for that. Armenian armed forces shelled fire to settlements in Azerbaijani positions. Azerbaijani Armed Forces repulsed the Armenian provocation for protection of the civilians living near the contact line,” The speaker said.

The meeting discussed the current state and prospects of development of cooperation in the for welfare of the Eurasian region in the 21st century.

The sitting themed "Inter-parliamentary cooperation for joint prosperity of the countries in the Eurasian region in the 21st century" was initiated by the Chairman of the State Duma of the Federal Assembly of the Russian Federation Sergey Naryshkin and Chairman of the Parliament of the Republic of Korea Chung Eui-hwa.

The event is attended by representatives of 19 countries. The agenda includes the development of inter-parliamentary dialogue, issues of expansion of cooperation in political, economic, legal and humanitarian spheres, as well as in environmental protection.

In addition, the meeting will focus on the consolidation of peace and stability in the region, countering extremism and inter-religious dialogue.