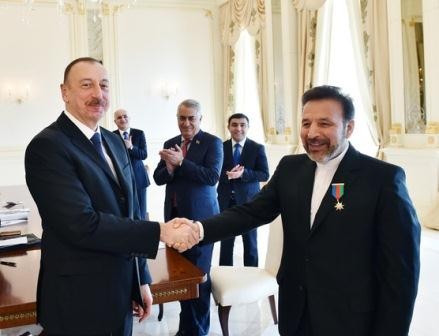 Azerbaijani President Ilham Aliyev has received a delegation led by Minister of Information and Communications Technology of the Islamic Republic of Iran, co-chairman of Azerbaijan-Iran State Commission on economic, trade and humanitarian spheres Mahmoud Vaezi.

The head of state hailed Mahmoud Vaezi`s contributions to the development of friendly relations between the two countries, adding the Azerbaijani government and people appreciated this. President Ilham Aliyev said Minister of Information and Communications Technology of Iran Mahmoud Vaezi was awarded the “Dostluq” (Friendship) Order, one of the high state awards of Azerbaijan, for his contributions to the development of friendly and cooperative ties between the Republic of Azerbaijan and the Islamic Republic of Iran, and handed the Order to him.

Minister of Information and Communications Technology of Iran Mahmoud Vaezi thanked the head of state for the “Dostluq” (Friendship) Order, and said he was proud to be serving their own people and the people of neighbouring Azerbaijan, which has the same religion.

The head of state touched upon the groundbreaking ceremony of a railway bridge over Astara River on Azerbaijan-Iran border, and described this as a result of the works done over the last period. President Ilham Aliyev expressed satisfaction with the implementation of all agreements reached between the two countries.
The head of state said he met with President of the Islamic Republic of Iran Hassan Rouhani in Istanbul, and discussed how to develop the bilateral ties. President Ilham Aliyev recalled with pleasure his visit to the Islamic Republic of Iran.

The head of state thanked for the greetings of President Hassan Rouhani, and asked the Minister to communicate his greetings to the Iranian President.