6th Summit of CCTS kicks off in Cholpon-Ata - Photo 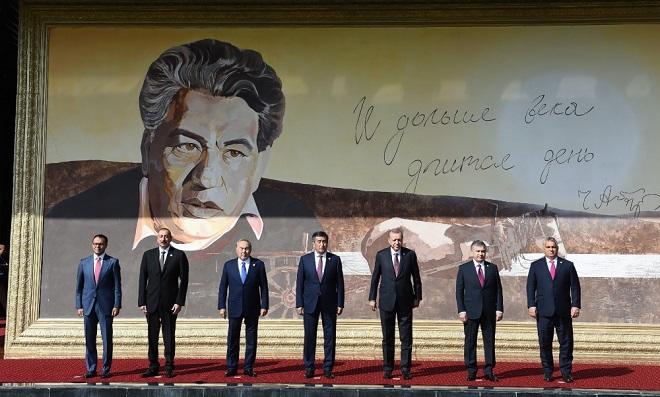 The 6th Summit of the Cooperation Council of Turkic Speaking States has kicked off at the "Rux Ordo" Cultural Center named after Chingiz Aitmatov in Cholpon-Ata, Kyrgyz Republic.

Axar.az reports that the President of the Republic of Azerbaijan Ilham Aliyev is attending the Summit.

Heads of state and government toured the territory of "Rux Ordo" Cultural Center named after Chingiz Aitmatov where they viewed statues of prominent personalities of the Kyrgyz people as well as monuments reflecting the history and culture of Kyrgyzstan.

Then, they posed together for photographs.

In his opening remarks, chairman of the Cooperation Council of Turkic Speaking States, President of Kazakhstan Nursultan Nazarbayev expressed his gratitude to the Kyrgyz President for the high level organization of the event and hospitality. President Nursultan Nazarbayev said that the participation of Uzbekistan and Hungary at the 6th Summit is indicative of the expansion of the organization's activity and the strengthening of solidarity. The strengthening of the Turkic Council's activities will make a significant contribution to achieving the emerging goals, he said.

Then, President of Kyrgyzstan Sooronbai Jeenbekov, President of Azerbaijan Ilham Aliyev and other heads of state and government made speeches.

The summit continues its work.