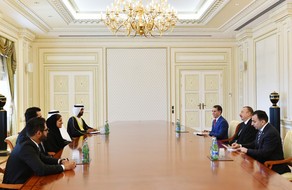 President of the Republic of Azerbaijan Ilham Aliyev has received Minister of State for Tolerance of the United Arab Emirates Sheikha Lubna Al Qasimi.

Noting that the relations between the two countries were developing successfully, the head of state recalled with pleasure his successful official visit to the United Arab Emirates and meetings he held there. Stressing that the two countries enjoyed friendly and partnership ties, President Ilham Aliyev noted that the number of Azerbaijanis visiting the UAE was bigger before, the number of UAE tourists visiting Azerbaijan had recently increased.

Sheikha Lubna Al Qasimi said Azerbaijan achieved the rapid development as a result of the implementation of the big infrastructure projects, adding that Baku had become a beautiful and modern city. Noting that this time she visited Azerbaijan as a Minister of State for Tolerance, Sheikha Lubna Al Qasimi said the UAE was a multi-national country, and hailed the role of different communities living here in developing the country and ensuring economic success.

At the meeting, the sides stressed the importance of successful cooperation between the two countries within international organizations, and exchanged views over the issues related to the development of the bilateral ties in cultural, trade, tourism and other spheres.