Foreign diplomats have been to Gapanli village 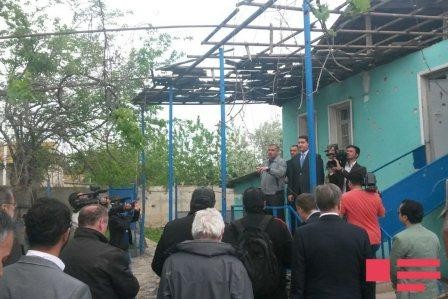 Representatives of the diplomatic corps accredited in Azerbaijan have started their frontline trip from the Terter district.

The delegation includes ambassadors of Turkey, Romania, Russia, Pakistan, Italy, Norway, Afghanistan, Palestine, Spain, deputy chief of mission of France, as well as military attaches of the US and the UK, correspondent of APA Information Agency reports.

The diplomats first arrived in Terter’s Gapanli district where they met with the head of district executive power Mustagim Mammadov.

Mammadov informed the foreign diplomats about the difficulties faced by local residents after Armenian armed forces intensively shelled the district.

Then, the diplomats reviewed the house of villager Ilgar Mammadov, which was destroyed in the Armenian shelling.

Azerbaijani Foreign Ministry has organized a trip for representatives of the diplomatic corps accredited in the country to the frontline in the directions of Aghdam and Terter districts.

The main purpose of the trip is to review the humanitarian and social consequences of heavy shelling by Armenian armed forces of Azerbaijani settlements, private and state-owned facilities, as well as army positions in April 2016.

One of the purposes of the trip of about 80 representatives including heads of diplomatic missions and military attaches is to provide the countries that the diplomats represent with objective information about the current situation along the contact line between Armenian and Azerbaijani troops.