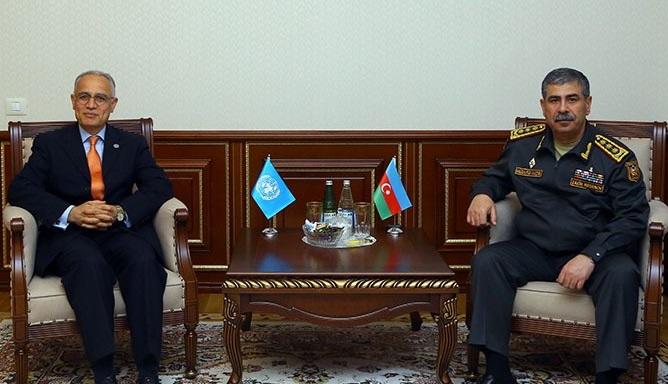 On April 22, the Minister of Defense of the Republic of Azerbaijan, Colonel General Zakir Hasanov has met with the UN Resident Coordinator in our country, Ghulam Isaczai.

The Minister of Defense stressing the fruitful and comprehensive cooperation of Azerbaijan with the UN noted that our country also began military cooperation within the framework of this authoritative organization.

During the meeting, the parties touched upon the issue of settlement of the Armenia-Azerbaijan, Nagorno-Karabakh conflict and exchanged views on the activities of the UN in this area.

The Minister of Defense recalled his recent participation in UN events in New York and discussed with the guest the results of the meetings held there.

G. Isaczai, in turn, highly appreciated the contribution of Azerbaijan to international security as part of the operations conducted in Afghanistan, and expressed appreciation for the active participation of Azerbaijani servicemen in peacekeeping missions.

During the meeting, the parties held an exchange of views on military cooperation within the UN and other issues of mutual interest.