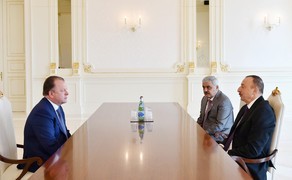 Hailing the excellent organization of the Judo Grand Slam International Tournament commemorating national leader Heydar Aliyev in Baku, the head of state stressed the importance of great achievements of Azerbaijani athletes in a variety of competitions in recent years. Recalling the high results which our national judo team recently achieved at the European Championship, President Ilham Aliyev hailed the increasing popularity of this sport in Azerbaijan. The head of state expressed hope that the country would more actively participate in international competitions in the coming years.

President of the International Judo Federation Marius Vizer expressed his satisfaction with the excellent organization of the Judo Grand Slam International Tournament in Baku.

Saying he has always supported the development of judo in Azerbaijan, Marius Vizer expressed his hope that Azerbaijani judo team would more actively participate in the competitions with a new strategy.

Marius Vizer highlighted the preparatory work related to judo as part of 2016 Summer Olympic Games to be held in Rio de Janeiro.

Stressing the importance of continuing active partnership with the International Judo Federation, President Ilham Aliyev highly appreciated Marius Vizer's support for Azerbaijan as the president of the federation and thanked him for his efforts in this regard.

Highlighting Azerbaijan`s attention to sports, President Ilham Aliyev said that the country had a long tradition of judo. The head of state added special attention was paid to the development of this sport in the country.

The head of state expressed his hope that Azerbaijani athletes would successfully participate in the world and European championships, as well as the Olympic Games.