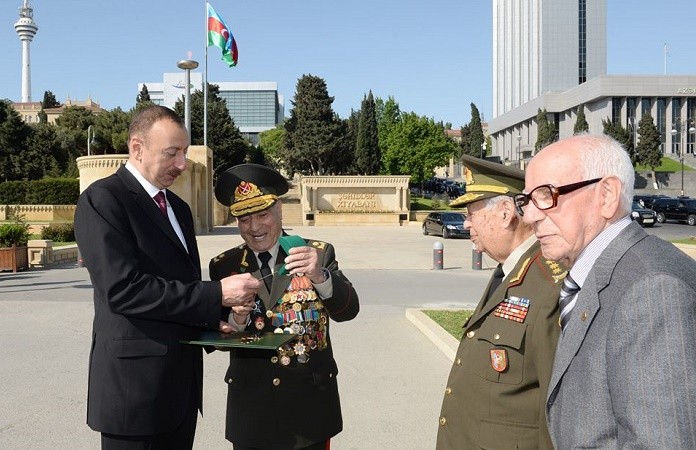 The President of Azerbaijani Republic Ilham Aliyev will meet with the Great Patriotic War veterans on the occasion of the 71th anniversary of the Soviet Union`s victory over Nazi Germany in World, Dadash Rzayev, the head of the Veterans` Organization of Azerbaijan Republic told local media.

Today 71 years have passed since the historic victory over the fascist Germany.

660 000 people from Azerbaijan participated in the war. Divisions from Azerbaijan moved from the Caucasus to Berlin. About 130 of our compatriots deserved the name of the Hero of the Soviet Union, 30 deserved the order of Honour, 170, 000 Azerbaijani soldiers and officers had been awarded with various orders and medals of the USSR. Hazi Aslanov-twice Hero of the Soviet Union, the Heroes of the Soviet Union- Israfil Mammadov, Ruslan Vezirov, Adil Guliyev, Ziya Bunyatov, Geray Asadov, Malik Maharramov and Mehdi Huseynzade, generals Mahmud Abilov, Akim Abbasov, Tarlan Aliyarbeyov and Hajibaba Zeynalov and many others brought honour to the history of our people.

Azerbaijan’s oil was one of the decisive factors in the Great Patriotic War. Oil production in Azerbaijan reached its peak in 1941 that made 23.5 million tons. That figure comprised 71.4% of all the oil produced in the USSR. Azerbaijani oil workers gave 75 million tons of oil and 22 million tons of petrol to the country during war years.