An event was held for Turkish soldiers in Nakhchivan - Photo 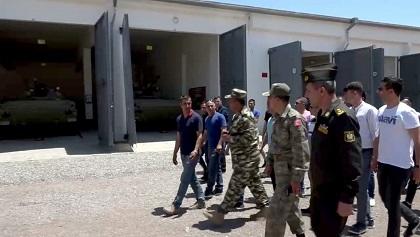 Cultural events have been held for meaningful holidays of the Turkish Armed Forces participating in the "Unbreakable Brotherhood-2019" training.

The servicemen of the Turkish Armed Forces got acquainted with the historical and cultural places of the Nakhchivan Autonomous Republic and the Religious and Cultural Monument Complex "Ashabi-Kahf Pilgrimage".

Within the framework of the trip, Turkish soldiers were acquainted with the social-living conditions, weapons and techniques of the personnel of the Armed Forces of the Armed Forces, and watched a documentary film about the army building in the Military Training and Training Center.

Guests have dinner with our military.