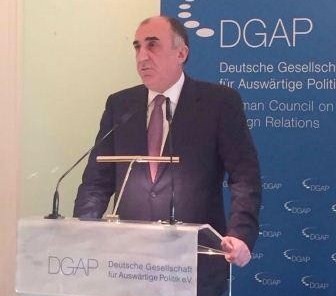 Azerbaijan's Foreign Minister Elmar Mammadyarov addressed on foreign policy of the country at the German Council on Foreign Relations, the press service of the ministry informed.

Within the framework of his working visit to the Federal Republic of Germany, Azerbaijan's Foreign Minister Elmar Mammadyarov made a report titled "Azerbaijan and its Neighborhood: Challenges to the Foreign and Security Policy" at the country's leading think tank on international affairs, the German Council on Foreign Relations.

In his speech, Minister Elmar Mammadyarov spoke about Azerbaijan’s role in ensuring of stability in the region, development, regional cooperation, international partnership and the economic and geopolitical importance of large-scale regional projects carried out with the participation and initiative of Azerbaijan, the balanced foreign policy of the country, as well as the Armenian-Azerbaijani conflict.

Minister Elmar Mammadyarov noting the resolutions and decisions of international organizations on the conflict, said that Armenia ignores the calls of the international community to put an end to the occupation, on the contrary it has recently increased attacks against Azerbaijan’s civilian population living near the frontline obviously violating the international humanitarian law.

The minister also stressed that the recent provocative statements made by Armenia.

Later, the minister replied questions of the participants.

The event was attended by 150 participants, including members of the Azerbaijani Parliament and the German Bundestag, representatives of the German government, the country's political, scientific and cultural figures, foreign diplomats, media representatives and students.