"Turkey grateful to Azerbaijan for support" 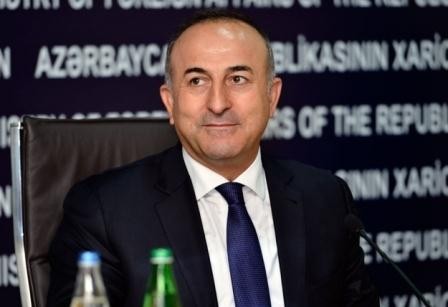 Turkey condemns the terrorist attack in Ankara and is grateful to Azerbaijan for its support, Turkish Foreign Minister Mevlut Cavusoglu told reporters on Thursday.

He made the remarks following the meeting with Azerbaijani counterpart Elmar Mammadyarov in Baku.

Cavusoglu stressed a need to unite even more in the fight against all forms of terrorism.

He added that the meeting of the Turkey-Azerbaijan High Level Strategic Cooperation Council that was postponed due to the terrorist attack will be held soon.

Azerbaijan and Turkey have a will to further develop the relations, Cavusoglu said, noting that he discussed a number of joint projects during the meeting with his Azerbaijani counterpart.

Turkey and Azerbaijan are together working on all issues, including the Nagorno-Karabakh conflict, according to Cavusoglu.

Moreover, the Turkish FM strongly condemned the Khojaly tragedy, cursing the perpetrators of this massacre.

Turkey and Azerbaijan share a common position on counter-terrorism, he added.