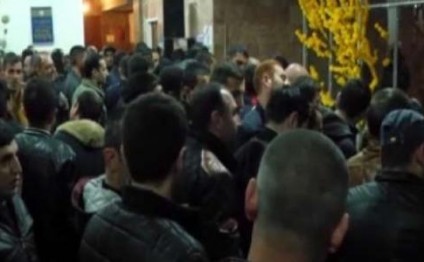 An armed group of Armenians have assaulted on Azerbaijanis in Lvov city, Ukraine, wounding 6 Azerbaijanis.

The incident happened around 16:00 local time.


Chairman of the United Congress of Ukrainian Azerbaijanis, Rovshan Taghiyev told APA that Armenians assaulted a store owned by Shahriyar Rajabov, the Congress’s youth organization in Lvov Province, and his brother Maharram Rajabov, assaulting the Azerbaijanis in the store.


The assailants said they had sought to avenge the beating of Armenians by Azerbaijanis in a mass brawl over the waiving of the separatist Nagorno-Karabakh regime’s flag during a Wushu Sanda contest held in Lvov 3 days ago. At the time of the incident Rajabov managed to escape to the neighboring store and then a new brawl erupted. Fearing they were going to be beaten again, Armenians used arms, wounding 6 Azerbaijanis. Lvov law enforcement agencies as well as the security service are investigating the incident. The Armenians involved in the brawl are being searched for.