"Armenia is unable to control the situation" 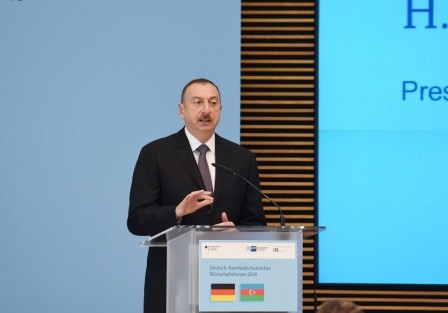 The ceasefire is very fragile, Armenia is unable to control the situation, and the status quo cannot continue this way, said Azerbaijan’s President Ilham Aliyev.

He made the remarks at the opening of the Azerbaijan-Germany Economic Forum in Berlin June 7.

The head of state stressed the importance of the withdrawal of Armenian armed forces from the occupied Azerbaijani territories, noting that the migration crisis that Europe is facing now is a problem that Azerbaijan experienced two decades ago.

The president said unfortunately Armenia has faced no sanctions for refusing to fulfill the UN Security Council resolutions on Nagorno-Karabakh.

“Early settlement of the conflict will serve stability in the region,” President Aliyev said, noting that despite the complicated situation, Azerbaijan is developing successfully.

According to him, massive political and economic reforms have been carried out and all freedoms ensured in the country over the last 25 years.

“We dedicated the period of ceasefire with Armenia to development of our country,” said Ilham Aliyev.

He added that Azerbaijan is playing a key role in implementation of global energy projects.