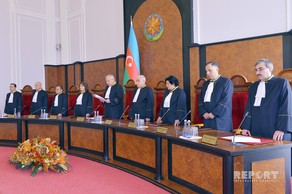 Constitutional Court is to consider in the coming days the draft of Referendum Act "On Amendments to the Constitution of the Republic of Azerbaijan", with instructions of Azerbaijani President Ilham Aliyev.

In accordance with the legislation, consideration of proposals of the President are to be considered from the date of its publication, ie. within 7 days from July 18. Azerbaijani President.

Azerbaijani President shall obtain the testimonial of the Constitutional Court in connection with the proposals for changes in the text of Constitution of the Republic of Azerbaijan.