Photos political leaders don’t want you to see - I Part 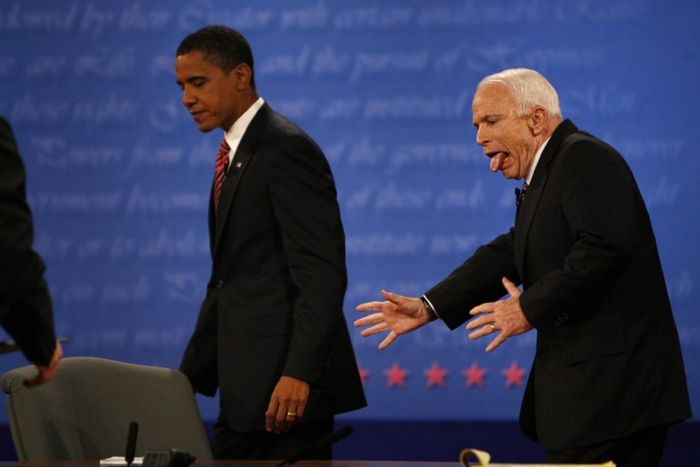 Political leaders are meant to act as figureheads, idols, and iconic commanders that represent the strength and virtue of our nation. We trust these men and women to make critical decisions that affect our daily lives and the lives of people around the world. As such, politicians are meant to be held to a much higher standard than the common man.

But unfortunately for these politicians, the internet now exists. These 40 photos take this illusion of integrity and grace that these leaders have established over the years, and shatter it in one quick snapshot. Here are some of the best perfectly timed photos of politicians: 2. Joe Biden gets cozy at a diner Does Vice President Joe Biden frequent Cruisers Diner? Because he looks pretty comfy and familiar with both the restaurant and some of the restaurant patrons. Sometimes we like to see that our politicians are just average Joe’s (get it?) that like diners, burgers, and fries, just like us. The woman seems to be happy where she’s sitting but the biker guys don’t seem so thrilled about it. A topless protester got Vladimir Putin excited while he was visiting with German Chancellor Angela Merkel in Germany. 5. Castro says no to Obama hug Former U.S. President George W. Bush tries to give back a baby after it starts crying during an outdoor dinner with German Chancellor Angela Merkel in Trinwillershagen.

8. Danish Prime Minister not so graceful Selfies are the kind of thing you can enjoy anywhere, even during Nelson Mandela's funeral. Former President Bill Clinton and Baraka Obama playing golf together. From the look on Bill's face, the two may be nagging about their wives.