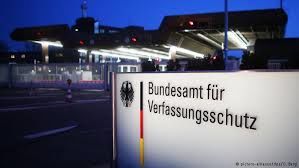 When investigators searched the suspect’s home in the western town of Toenisvorst they not only found evidence he had betrayed secrets, but also discovered pornography featuring the 51-year-old man, tabloid Bild wrote.

The Bundesverfassungsschutz (BfV) intelligence agency declined to comment on the report because of the ongoing investigation. It has said the man was arrested after making Islamist statements on the Internet and offering to share sensitive data about the spy agency’s work in chatrooms.