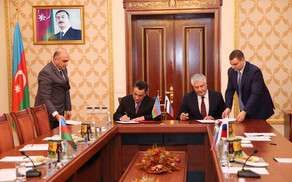 Azerbaijan and Russian ministers of internal affairs have signed a protocol on mutual assistance for 2017-2019 in Baku.

Axar.az reports, the document was signed by Azerbaijani Internal Affairs Minister Ramil Usubov and his Russian counterpart Vladimir Kolokoltsev. Speaking at the signing ceremony, the two ministers expressed their confidence that the protocol will contribute to expanding relations between Azerbaijani and Russian law enforcement agencies.

Kolokoltsev said Russia is interested in developing cooperation with Azerbaijan in all areas, including between internal affairs authorities.