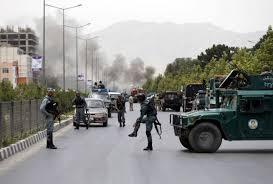 Gunmen attacked the house of an Afghan member of parliament in the capital Kabul on Wednesday night, killing as many as five people, officials said.

Axar.az informs, one police official said three gunmen attacked the house of Mir Wali, a member of parliament from the volatile southern province of Helmand and killed three security guards and two members of the MP's family. The incident underlined the fragile security situation in Kabul, which has seen repeated attacks by suicide bombers and gunmen in recent months. Helmand, one of the strongholds of the Taliban and source of much of the world's opium, has fallen increasingly under insurgent control over the past two years.

Officials said police special forces were at the scene of the attack and were concentrating on evacuating people from the house and nearby areas. The gunmen were still believed to be inside the house, with local news station Tolo News quoting local residents as saying the sound of gunfire and explosions could be heard.