Obama to Trump: Presidency is not a family business 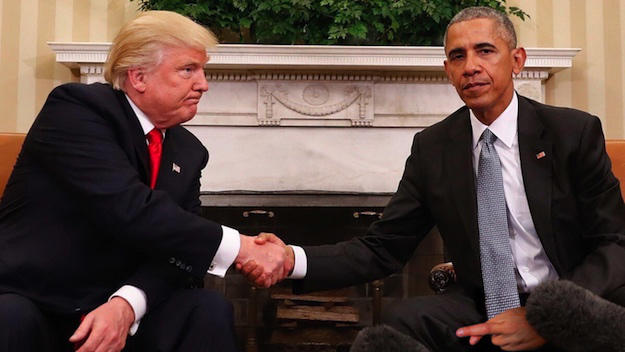 US President Barack Obama said in an interview broadcast yesterday that he has tried to impress upon president-elect Donald Trump that running the White House is different from any other job.

The main thing he's tried to convey is that there's a difference between governing and campaigning, Obama said in the interview with ABC News.

"What he has to appreciate is as soon as you walk into this office after you've been sworn in, you're now in charge of the largest organisation on Earth," Obama said.

He has told Trump the operation can't be managed like a family business, and he will have to have a strong team around him.

"You have to have respect for institutions and the process to make good decisions because you are inherently reliant on other folks," Obama adds.

The interview comes as Obama prepares for a farewell address scheduled to take place Tuesday evening and as he prepares to leave office on Jan 20, the same day Trump will be inaugurated.

Obama added that he has also talked to Trump about having confidence in US intelligence agencies and knowing that "there are going to be times where the only way you can make a good decision is if you have confidence that the process is working."

Top US intelligence officials on Friday briefed Trump about their investigation into Russian cyberactivities during the presidential election.

They concluded that Russian President Vladimir Putin "ordered" a campaign to influence the election to undermine faith in the democratic process and to hurt Democratic Party candidate Hillary Clinton.

He also issued a statement saying he had "tremendous respect" for the work of the intelligence agencies, contradicting earlier messages that were critical of their intelligence assessments on weapons of mass destruction prior to the 2003 invasion of Iraq, which proved to be false.

Trump spokespersonn Kellyanne Conway defended Trump's reaction and his statement, noting that he highlights that China and other countries also have mounted cyberattacks against the US government and US businesses.

She said the Democratic National Committee left itself vulnerable to the hack prior to the election and said the material revealed made no difference because the majority of US voters already had an unfavourable opinion of Clinton before it came out.

"All of this amounts to a very simple fact... the alleged aspirations to interfere with our democracy failed," Conway said on CNN.

In the interview with ABC, Obama also said he had given Trump advice about using Twitter. He said from the day Trump becomes president "there are world capitals and financial markets and people all around the world who take really seriously what he says."