Samsung leader quizzed for over 22 hours 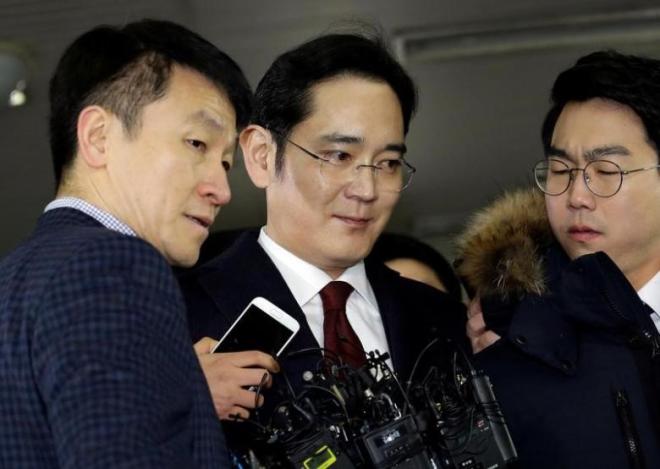 Axar.az reports that, Lee left the special prosecution office without answering reporters' questions and headed to a waiting car.

Prosecutors have been investigating whether Samsung provided 30 billion won ($25.46 million) to a business and foundations backed by Park's friend, Choi Soon-sil, in exchange for the national pension fund's support for a 2015 merger of two Samsung affiliates.

The special prosecutor's office said it would decide by Sunday whether to seek a warrant to arrest 48-year-old Lee, the third-generation leader of South Korea's largest conglomerate, or chaebol. There were no plans to bring him in for further questioning.

Lee denied some of the suspicions against him but had admitted to others, said Lee Kyu-chul, a spokesman for the special prosecutors' office who declined to elaborate.

The corruption scandal has engulfed the highest reaches of South Korea's elite, with Park impeached by parliament in December, a decision that must be upheld or overturned by the Constitutional Court. Park, who has been stripped of her powers in the meantime, has denied wrongdoing.

Jay Y. Lee was named as a suspect on Wednesday and summoned on Thursday morning for questioning.

Prosecutors were looking into whether he gave false testimony during a parliamentary hearing in early December, where the heads of nine of South Korea's biggest chaebol were subjected to an unprecedented 13-hour televised grilling by a panel investigating the presidential scandal.

Jay Y. Lee denied bribery accusations during that hearing, rejecting assertions from lawmakers that Samsung lobbied to get the fund to back the merger.

The chiefs of South Korean chaebol have over the years had prison sentences shortened or forgiven, or received pardons, with the economic impact of imprisonment cited as a factor.

Jay Y. Lee's father Lee Kun-hee, who has been incapacitated since a 2014 heart attack, was handed a three-year suspended jail sentence in 2009 for tax evasion. He was later pardoned.

Asked whether prosecutors would take into account any economic impact in their decision on whether to seek Jay Y. Lee's arrest, spokesman Lee Kyu-chul said: "From the point of the special prosecutor, we are conducting the investigation by law and principle. There is nothing further that I can say in that regard."