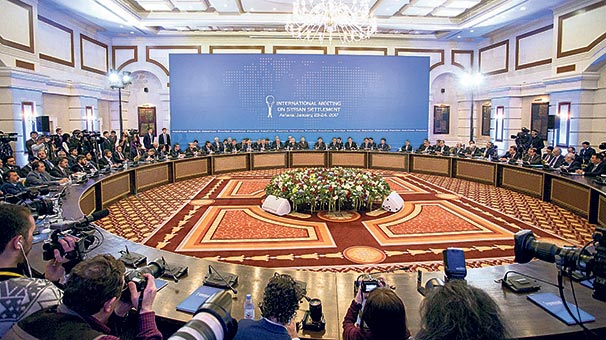 The third round of international talks on the settlement of Syria conflict started in the Kazakh capital Astana on Tuesday, despite an unexpected last-minute announcement by the Syrian opposition to boycott the negotiations. It began with preliminary consultations and the plenary meeting is to be held today.

The representatives of Russia, Turkey and Iran, as brokers of talks, as well as the envoys of the Syrian government, the UN and the US are attending the talks. The release of detainees and measures to strengthen an ongoing ceasefire and ensure humanitarian access are on the agenda of the talks in Astana, a source at the talks told Sputnik on Tuesday.

The opposition delegation announced a few hours before the talks started that it would not attend the talks because of what it alleged was Russia's unwillingness to end airstrikes against Syrian civilians and its failure to pressure the Syrian Army to abide by the December 30 truce.

The Russian delegation is led by Special Presidential Envoy for Syria Alexander Lavrentiev and the Damascus delegation by Syria's Envoy to United Nations Bashar Jaafari, while Turkey is represented by Foreign Ministry's Deputy Undersecretary Sedat Onal.

The delegations held various bilateral talks on Tuesday. The two previous rounds of high-level international talks were held on January 23-24 and February 15-16, while a technical meeting of experts took place on February 6.

In those meetings, Russia, Turkey and Iran, the organizers of the talks, agreed on protecting the Syrian ceasefire by establishing a joint group for monitoring it.

The last and fourth round of separate UN-brokered Geneva talks between the Syrian government and opposition groups was held late last month. Staffan de Mistura, the UN envoy, announced on Wednesday that he plans to start the fifth round of Geneva talks on March 23.