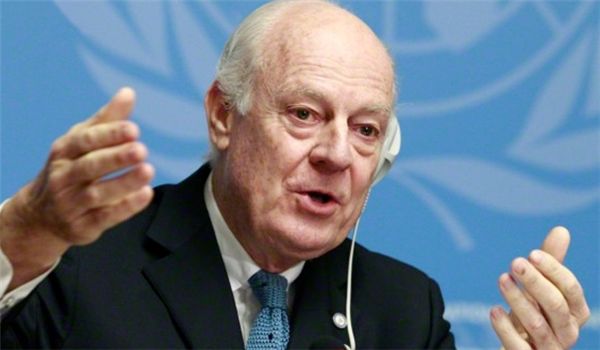 United Nations Special Envoy for Syria Staffan de Mistura has condemned Wednesday’s terror attacks in Damascus and called for observance of the ceasefire.

"The Special Envoy for Syria Staffan de Mistura condemns terrorist attacks in Damascus that took place today, coinciding with the sixth anniversary of the Syrian conflict. These attacks have claimed the lives of innocent civilians. They are also plainly designed to spoil attempts to sustain political talks," de Mistura’s office said in a statement on Wednesday. "The Special Envoy calls for an end to all attacks against civilians from any quarter in Syria, and reiterates his call for full respect of the ceasefire, which is being challenged by violations on the ground. In the aftermath of the latest Astana meeting and in advance of Geneva, actions by spoilers to undermine the political track must not be allowed to succeed."

By now, the death toll from the March 15 terror attacks in Damascus has reached 35. A suicide bomber blew himself up at the Palace of Justice near the Hamidiya marketplace in Damascus’ citadel. Another terror attack was committed later in Damascus’ western part.
An extremist chased by the police was blocked in the Al-Rabwah neighborhood and blew himself up in a restaurant. Twenty people were hurt, two of them were taken to hospital in serious condition.