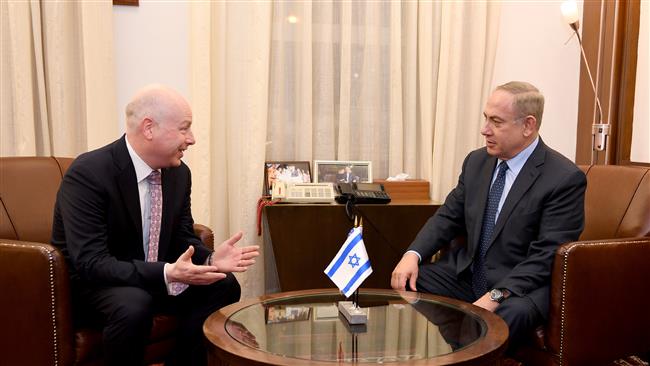 Four days of “intensive” discussions between the Trump administration and senior Israeli officials in Washington have ended without an agreement on a settlement construction policy.

The White House expressed President Donald Trump’s concerns about the Israeli settlement activity and the Israeli delegation agreed to take those concerns into consideration, according to a joint statement issued on Thursday.

The two sides said they would continue to engage in dialogue over the continued expansion of settlements in East Jerusalem al-Quds and the West Bank.

The talks were the latest step by Trump’s aides to pave the way for the resumption of the so-called peace diplomacy between Israel and the Palestinians.

Ironically, the discussions concluded on the same day as the Senate confirmed David Friedman, a pro-settlement hardliner, as the new US ambassador to Israel. Friedman, who once served as Trump's bankruptcy lawyer, is also critical of the so-called two-state solution.

Greenblatt met with Netanyahu in Jerusalem al-Quds earlier this month where they stressed “commitment” to the peace process.

Despite striking a more supportive tone toward Israel than former president Barack Obama, Trump urged Netanyahu during a White House meeting last month to “hold back on settlements for a little bit.”

The two leaders pledged that their advisers would try to work out a policy on Israel’s settlements on the occupied territories.

Trump has expressed some ambivalence about Israel’s settlements but has not publicly detailed what kind of agreement he seeks with the Israeli regime on the issue.

Israeli settlements are considered illegal under the international law and are seen as the main obstacle to the so-called peace talks, which have been frozen since 2014.

During a joint press conference with Netanyahu on February 15, Trump suggested he was ready to abandon decades of American policy in favor of a "two-state solution."

The Palestinians want East Jerusalem al-Quds as the capital of their future state, but expanding settlements by Israel have been complicating the process.

Emboldened by the election of Trump, Israel has given the go-ahead to the construction of hundreds of new settlement units.