Friedman is sworn in as ambassador to Tel - Aviv 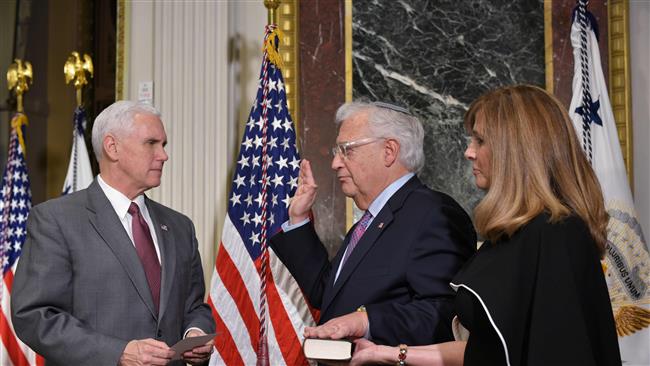 David Friedman, a strong proponent of Israel’s illegal settlements in the occupied Palestinian land, has been sworn in as the new US ambassador to the Tel Aviv regime.

US Vice President Mike Pence administered the oath of office to Friedman on Wednesday, about a week after the Senate confirmed his nomination in a 52-46 vote.

"One of the clearest signs of the president's commitment to the state of Israel and to its people is in his choice of David Friedman as America's Ambassador to Israel," Pence said, haling Trump’s decision to nominate the anti-Palestinian Jewish American attorney for the crucial diplomatic post.

Friedman, who once served as Trump's bankruptcy lawyer, is critical of the two-state solution to the Israeli-Palestinian conflict and supports Israel’s illegal settlement activities on the occupied territories. The 58-year-old has also backed the idea of moving the US embassy from Tel Aviv to East Jerusalem al-Quds.