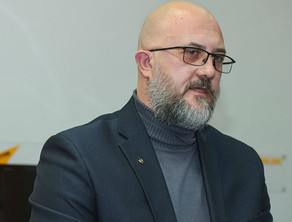 "As long as belligerent Serzh Sargsyan is in power in Armenia, situation around the Nagorno-Karabakh conflict will not change."

"The past year after the April events showed only one thing - ability of Azerbaijan to respond toughly to provocations and defend its interests", E. Mikhailov said.

According to him, for this period there were no special political achievements in the context of the Nagorno-Karabakh conflict settlement as a whole.

"The only thing that can be noted is Azerbaijan's regular attempts to find ways to a dialogue with Armenia and resolve the protracted conflict peacefully through diplomatic means. In response, we don't see anything”, Russian expert added.
He stressed that the intensifying bellicose rhetoric of Armenian President Serzh Sargsyan only says that while he is in power, situation around the Karabakh conflict will not change.

"On the other hand, Sargsyan recently, in my opinion, has committed major political mistakes. He rushes in search of support for his regime on the eve of the elections, fearing to lose the power. And his agreements with the EU and the attempt to be friends with NATO is snide remark to the main ally as Russia. This will not go unnoticed", the military expert said.

E. Mikhailov suggested that in the near future Serzh Sargsyan may leave, which can contribute to a real settlement of the Armenian-Azerbaijani conflict. "New politicians will come ,who will certainly look at changed world realities more realistic", political scientist said.