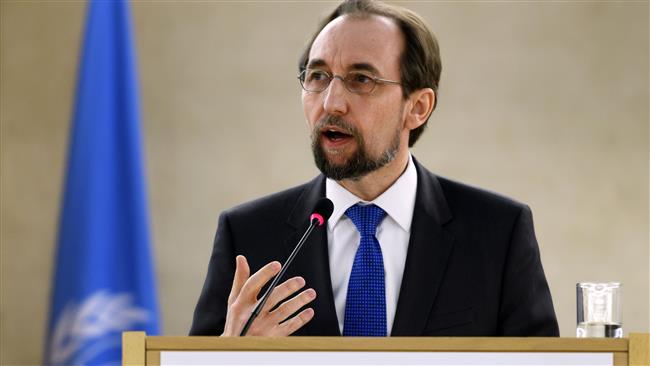 A UN human rights chief has called on Bahrain to probe a raid by regime forces on the house of Sheikh Isa Qassim which left five people dead last month.

"I urge the government to investigate the events of 23 May, in particular the loss of lives, to ensure that the findings are made public and that those responsible are held accountable," UN High Commissioner for Human Rights Zeid Ra'ad al-Hussein said Friday.

Dozens of people were also injured when regime forces attacked Sheikh Qassim’s supporters in the northwestern village of Diraz. The clergyman’s fate remains unknown, with some reports saying he is under house arrest.

The scuffles came two days after Sheikh Qassim was handed a suspended one-year prison term and ordered to pay a fine over accusations that he had used his position to serve foreign interests and promote sectarianism and violence.

In a statement, Hussein urged Bahrain “to choose a different path – one of engagement and dialog, as well as accountability for violence, regardless of the perpetrator.”

On Wednesday, Wefaq Deputy Secretary General Sheikh Hussein al-Daihi, called on the UN to conduct an investigation into rights violations in Bahrain.

"After all these crimes and violations and after the Diraz massacre, is it not high time for the United Nations secretary general to send a special representative to Bahrain?" he told the Middle East Eye news portal.

Daihi also accused the international community of being complicit in the regime's killings and measures against Sheikh Qassim.

"We believe that this latest escalation and the attack against Diraz … have taken place based on American and British approval, and are a result of the international community's silence and complicity in the crimes committed against the political majority as well as the majority of the population in Bahrain," he said.

The Diraz bloodshed came less than 48 hours after Bahraini King Hamad bin Isa Al Khalifah met with US President Donald Trump on the sidelines of a summit in the Saudi capital, Riyadh.

Since the Diraz attack, people have held several protests across Bahrain to denounce the incident and express solidarity with its victims.

On Friday, Bahraini demonstrators took to the streets of the city of Jidhafs to demand the removal of the US Navy Fifth Fleet from the tiny Persian Gulf country.

There was another protest in the village of Sanabis, where participants called for the overthrow of the Al Khalifah monarchy.