Putin thanks Trump for CIA data 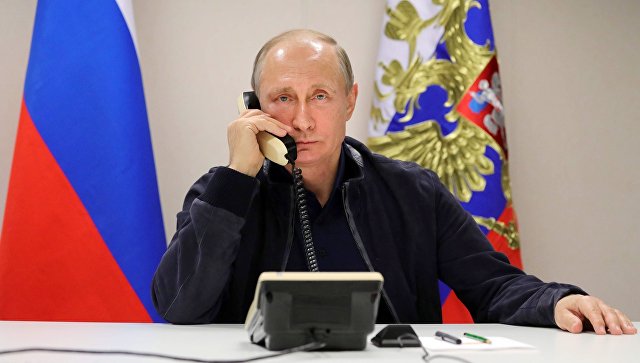 Russian President Vladimir Putin has thanked his US counterpart, Donald Trump, for CIA information that helped arrest terrorist who had plotted bomb attacks in St. Petersburg’s Kazan Cathedral and in other crowded places in Russia’s second largest city, the Kremlin press service said on Sunday after a telephone conversation between the two leaders.

"The Russian president thanked his US counterpart for information shared by the US Central Intelligence Agency (CIA) that helped trace, expose and detain a group of terrorists who had plotted explosions in St. Petersburg’s Kazan Cathedral and in other crowded places in that city," the press service said, adding that the conversation was initiated by the Russian side.

According to the Russian president, the CIA information was enough to expose and detain the criminals. Putin asked Trump to convey thanks to the CIS director and intelligence officers who had obtained this information.

The Russian leader reassured the US president that "Russian security services, should they have information about possible terrorist threats to the United States and its citizens, will swiftly and unconditionally share it with the US colleagues via partner channels," the press service stressed.

The press office of Russia’s Federal Security Service (FSB) reported earlier that seven members of a terrorist cell had been detained for plotting terror attacks. They planned to commit a series of murders and improvised bomb attacks in crowded places in St. Petersburg on December 16. One of those detained confessed to court he had planned a bomb attack in the city’s landmark Kazan Cathedral.