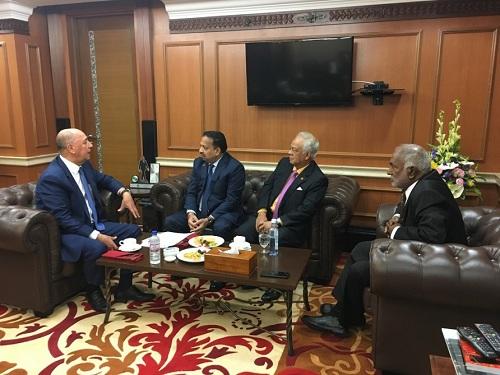 Azerbaijan`s Ambassador to Malaysia Galey Allahverdiyev has met President of the Senate of Malaysia Vigneswaran Sanasee.

Mr. Allahverdiyev said relations between Azerbaijan and Malaysia have further strengthened across the last 25 years. He also noted these ties steadily developed. The ambassador praised Malaysia`s support to Azerbaijan`s territorial integrity over the settlement of the Armenia-Azerbaijan, Nagorno-Karabakh conflict.

On reciprocal visits the diplomat said this created a fruitful opportunity for further expanding and deepening ties between the two countries. He touched upon Azerbaijan`s increasing image in the international arena, as well as the country`s socio-economic development.

On Azerbaijani-Malaysian inter-parliamentary ties Mr. Allahverdiyev stressed the role of these bonds in further development of cooperation.

Vigneswaran Sanasee, in turn said Malaysia is interested in expanding cooperation with Azerbaijan.

They exchanged views on current state of cooperation between the two countries.