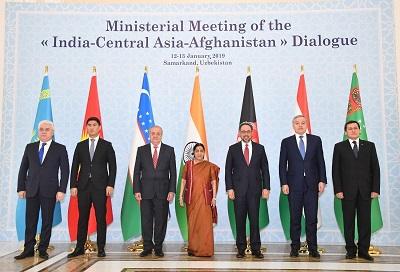 The first meeting of “India - Central Asia” Dialogue with participation of Afghanistan at the Ministerial level took place on 13 January 2019 in Samarkand, Republic of Uzbekistan.

The Sides noted ancient civilisational, cultural, trade, people to people links between India and Central Asia and expressed commitment to dynamic and fruitful friendly relations and mutually beneficial cooperation between India and the Central Asian countries at bilateral and multilateral formats.

The Parties reaffirmed the willingness for cooperation, mutual support, joint solution on relevant issues in order to ensure security, stability and sustainable development. In this context, the participants of the meeting welcomed the successful holding of the First Working (Consultative) Meeting of the Heads of States of Central Asia, held on March 15, 2018 in Astana.

All Sides condemned terrorism in all its forms and manifestations and agreed to cooperate in countering terrorism which posed a threat to the people and economies of the world.

The Ministers emphasized the importance of developing and implementing projects, that provide a concerted solution to the problems and issues of economic growth of the countries of Central Asia based on the principles of equality, mutual benefit and respect for their interests.

The Parties confirmed their readiness to promote the development of direct contacts between the business community and business organizations, entering new formats of cooperation between companies and enterprises. They noted the need to promote cooperation at the level of small and medium-sized businesses, start-ups, venture business.

The Ministers stressed the importance of holding industry-specific business forums and other mutual business events on a regular basis.

The Heads of the Ministries of Foreign Affairs noted the importance of concerted efforts to improve the investment climate and the market attractiveness of the region’s economy, business opportunities of the Central Asian countries on the world stage. The Ministers paid special attention to the need to expand and establish direct mutually beneficial economic and cultural ties between the regions and cities of India and the countries of Central Asia and expressed their intention to contribute to this direction.

Ministers noted interest in further deepening cooperation in development of transit and transport-communication potential of the countries of Central Asia, improving the transport and logistics system of the region, promoting joint initiatives to create regional and international transport corridors. In particular, the participants welcomed the accession of India into the Ashgabat agreement on creating an International transport and transit corridor.

The Heads of the Ministries of Foreign Affairs, stressing the need to develop trade relations between the countries of Central Asia and India, noted the desirability of considering the issue of multilateral mechanisms of interaction.

Ministers expressed interest in deepening bilateral and multilateral cooperation in cultural, scientific, educational, medical and information spheres by implementing joint projects, as well as enhancing cultural and humanitarian exchanges in the framework of people-to-people diplomacy, developing interaction of expert-analytical and public circles, Mass Media. The Parties gave priority to interaction in the preservation and study of joint cultural heritage and historical monuments.