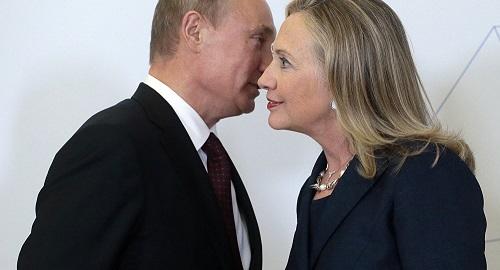 Last week, US Secretary of State Mike Pompeo announced that Washington would suspend its obligations under the Intermediate-Range Nuclear Forces (INF) Treaty and begin a six-month withdrawal process. The following day Russian President Vladimir Putin stated that Moscow was providing a mirror response.

Former Democratic presidential candidate Hillary Clinton has slammed the Trump administration's decision to pull out from the INF Treaty as a "gift to [Vladimir] Putin".

Speaking at an event hosted by Georgetown University's School of Foreign Service and its Institute of Politics and Public Service on Wednesday night, she claimed that the current administration withdrew "without really holding Putin accountable for his cheating on the treaty".

"I think there is agreement, it started in the Obama administration, that the Russians were not only developing intermediate-range capacity but deploying it — and so, when that happens… it seems to me that you want to do some public diplomacy. We clearly have pictures and we clearly know a lot about their cheating, and we should have done a better job in making it abundantly clear, not only to the American people but the Russian people, and Europeans, and others who are on the front lines, that the Russians were evading responsibilities in the INF", Clinton said.

She went on to tell the crowd that instead of demanding talks on the matter, the US decided to pull out, and claimed that Russia was going "to go forward and develop even more of these" weapons.