Zelinsky claims he can get Donbass back 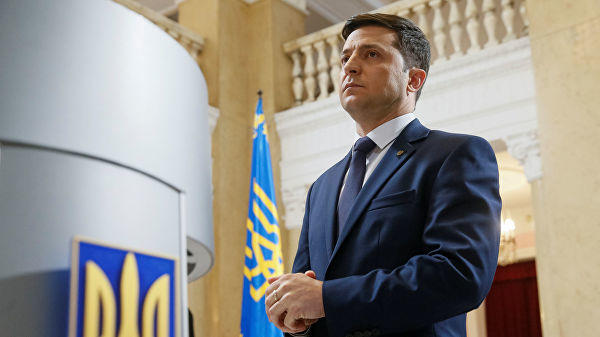 Servant of the People Party’s presidential candidate Vladimir Zelinsky believes that if he becomes the head of state, he could be victorious in the Donbass conflict. To that end, he is willing to try every means possible.

"It is impossible to stop the war," he said to the Radio Liberty journalists. "You either win or lose the war. And we can win by means of diplomacy, economic growth and reinforcing the army."

Meanwhile, he described the Donbass conflict that had broken out in 2014 as follows: "They wrested the territory away from us." "But this is only temporary," the candidate assured.

Zelinsky also said that he refused to recognize the results of the 2014 Crimean referendum and the peninsula’s reunification with Russia. According to him, the peninsula was and still is Ukrainian territory.

"Crimea is Ukraine. It was, it is and it will be," he said in the interview.

After the coup d’etat in February 2014, Ukraine’s new authorities failed to secure the support of all citizens of the nation and the Donbass Region opposed Kiev’s policy towards severing ties with Russia. The proposal to launch a campaign against citizens of eastern Ukraine was voiced by then-acting president Alexander Turchinov in April 7, 2014. The country’s forces were deployed to quash the protest in the region. Clashes between the army and Ukrainian nationalists on one side against Donbass militias on the other erupted in April 2014. By summer 2014, the conflict had grown into full-scale war with the use of military hardware and aviation.