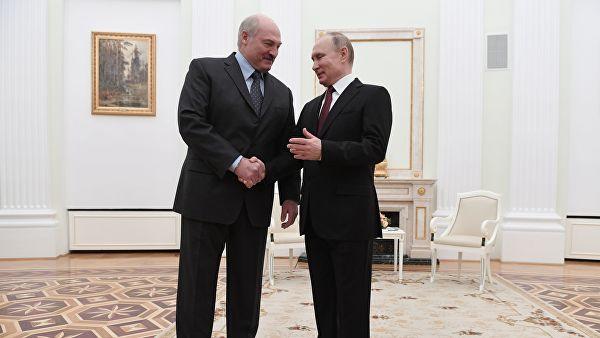 "President of the Russian Federation Vladimir Putin had a telephone conversation with President of the Republic of Belarus Alexander Lukashenko, during which the sides discussed current issues in the development of Russian-Belarusian cooperation," it said.

Tensions were seen in relations between Moscow and Minsk at the end of 2018 against the background of differences over the price of the Russian gas for Belarus. Besides, Belarus wants to compel Russia to provide a compensation for the tax maneuver that could push the oil price for Belarusian refineries up, while Russia seeks to intensify bilateral cooperation within the frames of the Union State agreement as of 1999.The parties have agreed to establish a task force consisting of the two countries’ officials to discuss further integration.

Also, Russia’s agricultural watchdog Rosselkhoznadzor imposed from April 12, 2019 temporary restrictions on supplies of apples and pears from Belarus amid suspicions of re-export and the absence of relevant information about Belarusian enterprises, amounts of their production and storage.

On April 19, the Belarusian side reported a sharp deterioration of the quality of the Russian oil running through the Gomeltransneft Druzhba main oil pipeline. The company informed operators of the Druzhba oil pipeline from other countries about the recent developments. Earlier reports said that the contaminant source had been revealed at the Samara-Unecha section of the Druzhba pipeline.

Vladimir Putin and Alexander Lukashenko have not discussed the issue of worsened quality of oil supplied from Russia to Belarus, Kremlin Spokesman Dmitry Peskov told reporters on Monday.

In another development, in April, the Belarusian Foreign Ministry accused Mikhail Babich of an alleged attempt to disrupt friendly relations between the two countries. That was the ministry’s response to the diplomat’s comment on Lukashenko’s statement. The Belarusian president said during his state of the nation address that the cost of BelAES (Belarusian Nuclear Power Plant) might total $7 bln against $10 bln planned earlier. Russia’s ambassador noted that the Belarusian leader had been misguided regarding the cost of BelAES as Russia had never announced it.