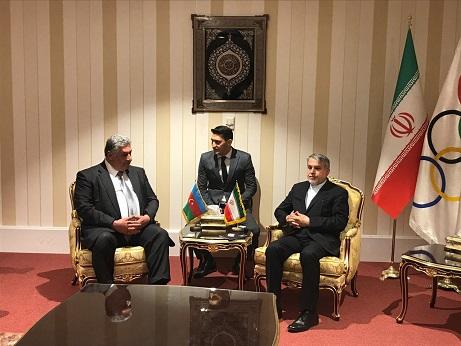 Azerbaijani Youth and Sports Minister Azad Rahimov met with Massoud Soltanifer, Minister of Sport and Youth Affairs of the Republic of Azerbaijan on May 13 within his visit to Iran.

Axar.az informs that, during the meeting, the sides discussed expansion of mutual relations and implementation of joint projects in the field of sports.

Rahimov said that the relations between the political leadership of the two countries are developing in a rising way: "This fact created a great basis for cooperation in sports and youth, and at the initiative of Azerbaijani President Ilham Aliyev the most modern sports complexes were built and put into operation. that Azerbaijan successfully hosted the First European Games in 2015, the IV Islamic Solidarity Games in 2017, and Formula One in four consecutive years.

" The Minister said that Iran is a close neighbor and friendly country for Azerbaijan, and therefore, the participation of our athletes in the tournament contributes to the expansion of cooperation in this field, and the fact that the borders of our countries does not create difficulties for the athletes.

Reminding that the final match of the UEFA Champions League 2018-2019 season will be held in Baku on May 29, Minister said that over 40,000 European football fans will arrive in Azerbaijan due to this prestigious sporting event.

Thousands of Iran will also visit Azerbaijan to watch this match. A.Rahimov informed about the sports infrastructure of Azerbaijan and noted that a clinic meeting modern standards for the rehabilitation of athletes was created under the Ministry of Youth and Sports. Iranian athletes can also be involved in rehabilitation courses at this clinic.